On September 7th and 8th, a Saturday and Sunday, I went to the US Cannabis Cup in Seattle. I had heard of the High Times magazine a few times. I got an email from the former president, now budget authority, of WWU SSDP from someone (forwarded to me) asking if our club wanted a nonprofit booth for the event. Of course, I said yes.

Preparation for the whole thing was stressful. Not to play into stereotypes too badly, but I joked with myself that the people running the US Cannabis Cup were too stoned to give clear instructions on what had to be done. I sent an email to them asking to clarify something (if you have to know, where my booth was going to be because it wasn't included in the floorplan), but I never got a reply.

When I arrived, I was still confused on where I was supposed to go. They told me to go inside, so I did. I asked another vendor about what I was supposed to do, but he said that they didn't give instructions and that everybody just chose wherever they wanted. I did just that.

Because I was working the booth by myself, I didn't really have time to explore. People came by, picked up what we had to offer, sometimes talked to me, etc. Someone even gave me hash oil.

What really caught me by surprise was the amount of people who would pass by the booth and say something along the lines of, "Thank you for all that you do." Those who know about Students for Sensible Drug Policy seem to really be moved by all what the organization does. I learned a lot from having to study up on it before going to Seattle (and even during). Even though I, personally (because I just became president of my school's chapter), hadn't really done anything for SSDP before, and didn't really feel like I deserved all the thanks, I felt proud and reassured to now be a part of it.

I didn't go to the concert, but instead went out to drink with a friend, and went back to my hotel room a bit tipsy. Unfortunately, they forgot to clean the room I was in after the last guest(s) left, but I was too out of it to call or go down to the front desk. Yes, you have to know all of that.

On Sunday, I did a bit of exploring. I wanted to buy some souvenirs for friends, but there is really nothing here for nonsmokers, which they are. I ended up buying them both ecigs (from Dabstix), and one of them hemp twine. Seriously, not much non-marijuana stuff. The building I was in was freezing. Before I left to catch my bus to Seattle, I had remembered to find a sweater to bring with me. However, I did not remember to put it in my bag. Oops. I had to pee a lot. Yes, you had to know that too. I thought people who went inside the building were stoned...When I ventured outside - yikes. Nothing really caught my interest. I did find the booth that belonged to the author and illustrator to "If a Peacock Finds a Pot Leaf" - mentioned briefly in my Hempfest 2013 post. I'm glad to report that they are getting a lot of support. 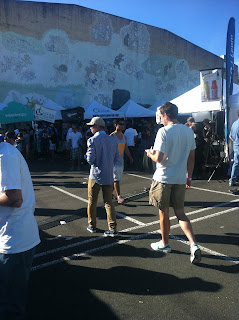 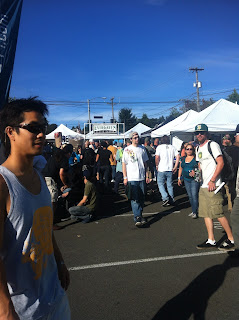 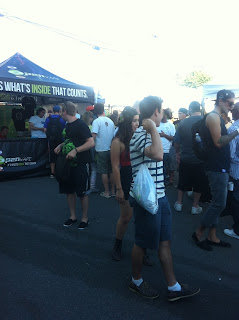 There wasn't much food there, which was disappointing. What was nice, though, was that most of the vendors used the iPhone credit card thingy (forget what it's called), so that I didn't have to depend on having a boatload of cash on me.

Overall, it was a fun experience. Not quite as good as Hempfest. Actually some people from there recognized me and vice versa. One woman said that this time around she didn't have a booth, but that it was nice for once to just go exploring. Even if I wasn't manning a booth, I don't think I would have had much joy checking it all out since it was even more pot-heavy than Hempfest. The panels were on stuff like edibles, etc. Things I'm not too interested in. Even though the US Cannabis Cup was more focused on the cannabis culture than policy and educational side (the side I enjoy), I really appreciated the fact that they had nonprofits, such as WWU SSDP, NORML, Sensible Washington, etc. in attendance. Heck, I even got in free.

Posted by Katrina Haffner at 7:28 PM